All off-topic discussions; a place to discuss anything and everything!
Post Reply
24 posts • Page 1 of 1

We are trying to visit all USA states but South Dakota and Wyoming always have us returning, we do a lot of road trips around this area...

Wyoming & Yellowstone is a must. For anyone wanting to see wild wolf and bear roaming free and within Yellowstone, if you get up early enough and drive you will see many. Most photos unfortunately are on mega zoom lens, you will never get close to the wolves... bear is a different story.
You do not have the required permissions to view the files attached to this post.
It all makes Perfect Sense
http://www.youtube.com/watch?v=TvUs5ugU ... re=related
Top

few more pics of Wyoming
You do not have the required permissions to view the files attached to this post.
It all makes Perfect Sense
http://www.youtube.com/watch?v=TvUs5ugU ... re=related
Top

Really great pics Roy. I'd love to go to Yellowstone.
There was a recent documentary on about it and it looks amazing.
- Fiona -

Fab pics Roy. I was there a few years back and got some great shots too but not on digital camera.
I was lucky enough to see a coyote too and got good shots of a couple of bears among other things.
Top

I like teasing mum about our trip to Yellowstone, she actually got out the car and chased a Black Bear with her camera.

She also stopped the car and took a trail through the forest (alone, except for us girls aged 6 and 10), sitting on a rock in the middle of a clearing she suddenly realised she was sitting in a woods filled with bears, wolves and big cats and high-tailed it back to the car......

blufawn wrote:I like teasing mum about our trip to Yellowstone, she actually got out the car and chased a Black Bear with her camera.

LOL... it was two bears actually..

and what about the white water rafting eh lol...

I never 'allowed' you to jump in, you jumped in to save a bucket before I could stop you and you got washed away lol...

Great photos Roy. I love Yellowstone- I worked there one summer and it was great. I also love Wyoming- the Tetons, and most especially the Wind River Range. Cirque of the Towers is one of the most beautiful places on earth! I would love to bring Loki and Freja - I'm pretty sure pets are allowed in the National Forest...
Top 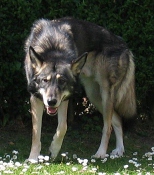 Yes, griz are scary--I think. They don't have body language like canines do. Uh, I have a Yellowstone bear story:
So, it was our last hoorah to try and film a coyote den for my thesis film before we moved back to Pennsylvania. I was going to camp for two weeks mostly alone because Ben had to work in Bozeman. So, Ben came down on the first weekend and we went to Pebble Creek campground (in Lamar Valley) to set up our site. The first night the ranger came around and said to camp at your own risk because there was a problem grizzly bear in the area (the bear had caused problems with backpackers in the previous season). Ok, so we decide to sleep in the jeep...plus it was a downpour that night.
So we get up the next morning only to find that park staff had placed a culvert trap in the campground in an attempt to trap and move the bear. They had had no success.
Ben and I leave for the morning--with all our camera equipment in the car to film whatever while we look for a coyote den. (no help from the rangers--that's another story entirely.) We get maybe a mile down the road and there's a bear on the side of the road in Round Prairie--(if you know the area it's so beautiful!) There were so many people around that we decide to get out and get a couple of bear shots for the film--why not, right? So we get a few shots of this rather large, male grizzly, get back in the car and then drive on. After about five minutes we realize we must return to the campground because we've forgotten something.
We get back to the campground to find the rangers telling everyone that the campground will close because the bear had pounced on a tent. (the same bear we just saw a minute ago, and filmed). So everyone was packing up and hoping to find a site at the next campsite over: Slough Creek, which was 30 miles away. So we pack up all our junk and cross our fingers that there will be a site open. (as this is the only other campsite in Lamar, and the next closest open campground is almost an hour away (this was early spring)). We get to Slough Creek, find a site and at this point it's Sunday afternoon--and Ben must return to Bozeman. I leave to film for the day around Lamar Valley, return to my site that evening, and begin to cook dinner over the campfire.
Wouldn't you know it--but here comes the ranger with a sign to nail to the tree: "Danger, Grizzly Bear in the area, camp at your own risk." That same bear had high-tailed it over the mountian from Pebble Creek to Slough Creek!

I slept in the car for the entire week. Alone. And they never did catch that bear. (but I did find two coyote dens--you can see some of the footage in my films on my YouTube channel: www.youtube.com/coyotegyrl. The film titles are "Spirit Dog" and "Chasing Coyotes"; dated now, but still fun.
The funny thing is--we had become friends with the rangers because we went there so often (over an entire year). We "heard through the grapevine" that the tent that was pounced on was in fact a park employee's tent. And that the only thing in the tent was not food--but pot.

Hawthorne wrote:We "heard through the grapevine" that the tent that was pounced on was in fact a park employee's tent. And that the only thing in the tent was not food--but pot.

Wow, a wasted Grizzly on the rampage, just imagine it lol

that was a great story, can just imagine you trying to sleep at night in tent or car, up and alert every 2 minutes saying what was that noise?
I guess the smell of food goes a long way and its easy for a grizzle to wander into a campsite or someones back yard for easy pickings

We visited a "Naughty Bear Park" West of yellowstone where most the bears there being held were ones that kept wandering back to peoples back yards raiding bins or wildstock, they had a choice of being shot or held captive at the centre as they kept wandering close to homes.

.
some other pics, why have a stool at a bar when you can sit on a saddle?
You do not have the required permissions to view the files attached to this post.
It all makes Perfect Sense
http://www.youtube.com/watch?v=TvUs5ugU ... re=related
Top

few more pics
You do not have the required permissions to view the files attached to this post.
It all makes Perfect Sense
http://www.youtube.com/watch?v=TvUs5ugU ... re=related
Top

Great story and great pics Roy... Youve made me want to search now for all my snaps lol.

I was staying in a motel in Banff National park when there was a commotion in the next room during the night. Apparently the next morning we found that a bear had ripped the door off. Fortunately no one was hurt

Had another encounter at the road side with two bears and managed to get some great shots before they headed off up into the mountain. Bears after wolves are my fav animals.

I am sitting in the Charlotte airport waiting for my connection to Denver...then driving to Cheyenne, WY for an interview.
Wish me luck!!!

Cheyenne sounds like a cool place to live... one of the pups from my recent litter has been named "Cheyenne" by his new owners.

Cheyenne:
You do not have the required permissions to view the files attached to this post.
It all makes Perfect Sense
http://www.youtube.com/watch?v=TvUs5ugU ... re=related
Top

and your not bad either