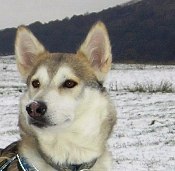 We get quite abit of publicity being one of only 4 husky ride centres in the UK. We were recently in TimeOut Magazine and the piece can still be seen online here:-
http://www.timeout.com/london/feature/1 ... ear-london
Top

Very cool. Looks like a lot of fun and great publicity for you. Any chance you could get them to mention that one of your lead dogs is a Tam instead of a Husky?
Ben Premack
www.WhiteElkTamaskan.com
www.Facebook.com/WhiteElkTamaskan
Rhea (Saxon Aquila at White Elk), Sophie (Saxon Canis Venatici at White Elk), and Auri (Blufawn Sunshine on My Shoulders at White Elk)
Top

Hi Chantelle... I thought there were only 3 tours here in UK... Forstals of course (Thetford Forest) and the one in Aviemore where is the other apart from yours?
Top

We do try and educate people to tell them she's a tam and they nod at me, but I know they're not really paying attention and they are just going to call them all huskies!! We do have a piece going in Dogs Monthly or something like that in December, so hopefully they will get all the facts right!!
The centre's are:-
Cairngorm
Pesky Husky's (yorkshire I think)
Husky Experience (Kent) and
Arctic Quest
Not sure whats going on with Forstal, as their website is down and they are off the experience company sites. The do run in summer early/late like we do, so don't know whats happened. Maybe you might know something?
Mind you I'm not sure how many yrs I could cope with being up at stupid o'clock to run them - cos now it's too hot!!!
Top

Not sure what has happened with the Forstals but must find out. I think they may have had their licence taken off them as they were running in the Thetford Forest and that could have been dangerous with all the public around and about. I never knew how they got permission to do that but they have been in the newspapers and even on tv demonstrating their skills which they certainly have for sure. They are very lucky living in the middle of the forest too. Have you ever been to their place it is awesome

No I've never been to Forstals, but would love to, I saw them doing a ride for blue peter and one of our dgos has Forstal lines. I bet they would be really interesting to meet and talk to.
Must be amazing to live in a forest, but understand about running on public tracks. Guess that's where were lucky having a private route, which the public can't access.
If you hear any news let me know. Maybe they've got fed up with racers 'knocking commercial husky operations.' we get abit of flack from some who disagree with it, but others are lovely and have been really helpful.
I just think everyone who wants to and can should be able to enjoy the experience and thrill of running dogs, as long as it's safe and relatively controlled!!
Oops will get down off my soapbox now!!!
Top

I totally agree with you as it is such fun particularly in the snow. Sometimes I wish I was still living in Finland with all that snow

There are also the first importers of the Siberian Husky into the UK many years ago. The original Forstals are now deceased but the family business continues.
Top
Post Reply
9 posts • Page 1 of 1

Return to “Tamaskan Dogs in the Media”