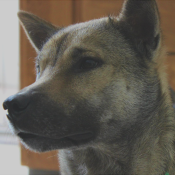 Nami is my 3 year female Kishu Ken. The most common Kishu color is white (recessive red) and all Kishu who are not white are called "yushoku" (with color). Nami's specific color is called sesame (or black sesame, to some). She is one of four of her color to be exported from Japan. There are 3 sesame Kishu in North America and 1 in Europe. I didn't get her for her color, but I admit that I love the yushoku dogs to the white. Kishu can actually come in a wide range of colors and patterns-- black and tan, brindle, red, sesame, white, and any of those colors with or without pinto, urajiro, or masking.

She came to me in May of this year. She was placed with me after suspicion that she was infertile. She was imported from a Japanese kennel producing dogs unrelated to those in the USA with hopes that she could help the North American population, but by 2.5, she hadn't gone into an obvious season.

Surprise of surprises, she was pregnant when she came to me by my friend's (her previous owner's) male Kishu. We had 5 amazing little fuzzballs at the end of May.

Nami is a great dog. She's a total go-anywhere, do-anything kind of dog. She's unflappable, she's a people-lover, and a snuggler. The Kishu as a breed attracted be because they seemed much more set and confident than any of the other Japanese breeds and Nami definitely is! She's not quite as difficult as my Malamute was to train, but definitely not as easy and flexible as my Shikoku. Still, she's incredibly intelligent and clever. Kishu would excel in agility, flyball, or other canine sports. Nami and I train in SAR and I hope she can become the first of many Kishu active and working.

I think her only drawback is that she is ALWAYS hunting. Always. There is no off-switch. If she sees something pounce-able, it is going to get pounced if she has anything to say about it. Needless to say, she cannot be trusted around my cats and if play with the other dogs gets too heated, she can tip over into aggression, so I have to keep an eye on them-- she isn't allowed to be around the other dogs if I can't watch her only because she IS so playful and I don't want anything to happen. I know others who have had Kishu from a puppy have had fewer issues with their dogs and inappropriate hunting or predatory drift, so Nami and I continue to work on it, but I suspect she will always be a hunting dog, through and through.

Now that it has become obvious that Nami is not infertile, I am working on finishing up her health checks and starting a small project to help preserve the Kishu in the US. Very cute! Her structure, head and ear shape remind me of another primitive breed called New Guinea Singing Dogs, though it looks like the Kishu Ken is a bit larger

HiTenshi16 wrote:Very cute! Her structure, head and ear shape remind me of another primitive breed called New Guinea Singing Dogs, though it looks like the Kishu Ken is a bit larger

It's funny - Nami is about the same size as a NGSD and often gets mistaken for one. By "often", I mean, I am SURPRISED by the amount of people who know what a NGSD is and guess it on her in my daily life. It is an unusually common occurrence.

Nami is very small for a Kishu tho. She's around 30-32 pounds and 18" tall. Females should be at least an inch taller than that and are usually around 40 pounds. Males tend to get large and masculine and can be 21-22" and often around 50-60 pounds. I've heard the sire to Nami's litter is actually nearly Akita-sized, though (probably Japanese Akita).

Most of her puppies came out normal sized, more or less. I expect one of the boys is going to be big like dad, though.
Top

Pretty girl.
"Don't underestimate me.
I know more than I say.
Think more than I speak.
And notice more than you realize".
"you are free to choose
But you are not free
From the consequence of
Your choice "
Top
Post Reply
5 posts • Page 1 of 1