I have grown up with dogs all my life. We have always had family dogs, but I have never had one to truly call my own and i could say I am his leader. Every one of them were always sweet and loved people, however it was obvious they weren't exactly trained. I will be getting my very first dog this coming summer (hopefully an Alaskan Noble Companion Dog or a Tamaskan) and I want to do it right. So I have been scouring the internet looking for a book on how to raise your puppy right, how to train your dog etc but of course there are good and bad reviews on all of them. I wanted to get this forums opinion and ask questions rather than just google a question. So far the ones that looked good so far were

Before and after getting your puppy by Ian Dunbar (reviews say it is unrealistic)
The Culture Clash by Jean Donaldson (I worry since both dogs I am leaning towards are such new breeds it may not cover what I need to know)
The art of raising a puppy by the Monks of Skete ( right now this is a frontrunner)
How to raise the perfect dog:through puppyhood and beyond by Cesar Milan (I love his shows and think he would be great but alot of people dont like him)
How to be your dogs best friend by the monks of Skete
Cesar's way
Be the Pack leader by Cesar Milan

All of these books look great but I just do not know which one to get or maybe which two.
Would really appreciate as many opinions and comments as possible to help me decide.
Top

I myself would never use any of Cesar Millans methods. I have learned all of my training from watching It's Me or the Dog. I bought one of Victoria Stilwells books for reference.
That is the only book I have as far as dog training goes.

I have never bought any books, but i have followed victoria stilwell closely. I too would not buy millan books, i don't like his shows. 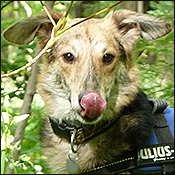 Forget Milan. Not to offend your choice of books, but his books are mostly filled with his self-important story of the American Dream come true, from poor mexican immigrant to celebrity.
It doesn't really give much advice on how to handle dogs other than countlessly stating that you have to be "calm and assertive" to be a pack leader, but never really telling you how to actually gain that state of mind. Secondly all his "dog psychology" seems to be based on the dominance theory which long since it was developed has been revoked, even by the person who originally came up with it. So basically Milan is yesterday's dog trainer.

Here's a really useful book which reflects human (primate) mentality vs dog (canine) mentality and helps avoiding countless misunderstandings between dog and owner;
http://www.amazon.com/The-Other-End-Lea ... +the+leash
It really helps you understand how and why your canine friend acts and behaves like it does.
You might also find this book useful:
http://www.amazon.com/On-Talking-Terms- ... ng+signals

I also highly recommend checking out kikopup's channel on youtube. She's a dog trainer from Sweden who uses progressive positive reeinforcement to train her dogs. Her tutorials helped me big time handling and training my fearful rescue puppy and gradually turn him into a confident dog and relyable companion. It's still a work in progress, but we've come so far already and training has been nothing but fun for both of us!
https://www.youtube.com/user/kikopup
The video tutorials are fun to watch and easy to learn from.

I can't say anything about the other books you have mentioned because I haven't read them.

Honestly from first time dog owner who grew up with dogs all her life to a soon-to-be first time dog owner who grew up with dogs all their life: I was surprised to find out that despite thinking I had a pretty good idea about dogs since my mum always had one, I knew almost nothing at all about them, their body language, how smart they are and the way they function.
I was shocked to find out that the whole "you have to be boss" mentality is such bogus, at least in the way people usually adress it and that a wagging tail doesn't always mean that the dog is happy or joyful, that dogs use tons of subtle signals that become very obvious to you once you know what to keep an eye out for. I also found that understanding my dog better helped me big time advancing in training with him.

I just picked this one up on Kindle and as a novice I've been really impressed with how straightforward and no-nonsense it is. The author is well-vetted, the training methods are positive and I feel like I'll be comfortable using them in combination with a weekly training class. Good luck!

Calming signals from Turid Rugaas, but probably not for sell in America? I don't know..

A book that every dogowner should read imo.

Gaby wrote:Calming signals from Turid Rugaas, but probably not for sell in America? I don't know..

A book that every dogowner should read imo.

This is a great book and has TONS of info!

Here's where I got the book (USA): http://www.sitstay.com/calming-signals/
Top
Post Reply
7 posts • Page 1 of 1