All topics pertaining to health and diseases that may affect your Tamaskan Dog, as well as treatment.
Post Reply
18 posts • Page 1 of 1 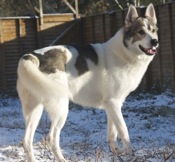 I just wanted to share information regarding my Oran being diagnosed with Addison's Disease - with the hope that if you have a pooch, especially with a similar family tree, it might give you an early heads up on what to look for and maybe save some heartache.
Addison's disease usually happens in females, so as Oran is male I recently decided that I would look into there being any link between the breed and illness. Unfortunately I found that there was a known link and that several dogs had already died.
What really hit home was finding a photo of a dog from the same kennels, born the same year, that died in 2009 of Addison's - he was the spit of Oran. It broke my heart. I often keep an eye on various dog breeds, including Utonagans and Tamaskans and had never read about the disease before - so I thought the best thing I could do was to contact various pages and give them information on Oran's illness and his family tree in the hope of spreading the awareness a little more.
Oran is thankfully alive today, but it was an extremely close thing. I figured that as Addison's is a difficult illness to diagnose that being pre-warned of the breed's possible predisposition to this disease is a good thing. If I'd have known about it before I would have had Oran tested before he got ill!

So, here are Oran's general details. He is a Utonagan, but his mum was one of the founding Tamaskan bitches so obviously there is a crossover.
Name - Oran - Blustag Brightbear
Born - 17th September 2004 (his birth/breed cert say 18th Sep 2004, but this is not correct!)
Bought from: Lynn Sharkey, Blustag Kennels in Wales (UK)
Dam: Mitka / Paloose, Loosa
Sire: Cougar
Mitka's parents: Chanoni & Kiwani
Cougar's parents: Amber & Thor

I'll briefly explain Oran's illness etc. I'm no vet - so for medical info you are better at looking up the internet - there are several websites regarding dogs with Addison's disease. But if you have any questions and I can answer them I will

At the start of February 2012 in the space of a few days Oran stopped eating (we tried everything) and drinking and wouldn't move. He was awake, he didn't whimper or anything like that - it was just like he had given up. So we took him to the vet and the next 3-odd weeks were pure hell. Oran was in and out 4 times in total. Each time he was in he went on a drip and they did various tests. The tests didn't show up anything conclusive and while on a drip he perked up massively, so he was sent home after a day or so. But then the cycle just repeated itself. Oran became just skin and bones. The last time we took him in the vet's face at seeing us return said it all - It all felt so hopeless. They were worried that he was perhaps suffering from kidney failure, which would explain why he perked up so much while on a drip. We honestly didn't think we were going to get Oran home again.
Thankfully, after further tests that weekend they concluded that he in fact had Addison's disease and in the space of a few days Oran was allowed home again....and has not had to return yet!
At the moment he is on 4 Addison tablets (these are human tablets - there is no specific medication for dogs) and 1/2 a steroid every day. He will have to take these every day for the rest of his life. As time moves on his dosage maybe be increased and he will also have to have blood tests every-so-often to monitor how he is doing, but it is just wonderful to have him back.
He was only diagnosed 5 months ago so it is still early days for us on his treatment path. At the moment though we seem to have been given a much livelier, bouncier Oran back. He is 8 years old, but the way he jumps around and throws toys at me, he seems like an Oran from quite a few years ago. I think he had been getting sick slowly over a period of time and then it just all became too much for his system.
Again, this just highlights to me the important of sharing knowledge - early diagnosis is the key to survival

So that's our story. I hope it is of use to someone. If you have any questions please ask away and I will do m best to answer what I can. Though, as I am off on holiday tomorrow I will be gone for a few weeks!

And just to end it on a more light hearted note - a wee anecdote: when we got Oran home from the vets the last time he was also on tablets for his kidneys, with his system still being flushed. Anyway, Oran is a very fussy dog and would never out of choice piddle in the house. Not that I want any dog to piddle in my house (haha), but Oran seems almost human with his disgust of a dog not being house trained! Anyway, when he was on the kidney tablets it made him need to go to the toilet a lot more. One time I came home and Oran had had a wee accident in the kitchen. I walked in and he was all sheepish...but Oran, being Oran, had tried to clean it up. He had set a whole 'kitchen roll' on top of the puddle, which had more or less soaked it all up.

Many thanks for sharing your story and I do hope that it will make a difference on many generations to come. With careful breeding and the detection of genetic lines, I won't stop hoping that one day the disease will be bred out or if not possible reduced.

Pray that the disease will cease to exist in the breed with the passage of time.

Thanks for sharing! Hopefully Oran will continue to do well on the meds

I am glad you are sharing this with us. I hope Oran lives a long healthy life, please keep us updated.
- Kate -

Thanks for sharing. I hope he continues to do well on his meds. He is a beautiful boy

oran is lovely and i hope he continues to thrive for many years to come. i am having problems atm with lexi not eating and having blood in some of her stools. i do hope that she doesn't have addisons as i was hoping to breed with her. she has been given antibiotics today for a week and will take her back next week for check up. thanks for posting as lexi shares all lines somewhere in her history that oran has so i am hoping that she wont have this horrible disease.
www.starlight-tamaskan.co.uk
Top

Diagnosed with Addison's Disease:
(several dogs in each pedigree are also ancestors of Tamaskan Dogs, which can be found in most Tamaskan bloodlines)

It would seem that inbreeding (as well as close linebreeding compounded over several generations) is predominantly responsible for the inheritance of Addison's Disease within these bloodlines.

Here is Bluemoon last that Debbie posted. He was a pretty boy.
Top

And a facebook group for wolfalike dogs (Utonagan, NI, Tamaskan, etc) that have been diagnosed with Addison's Disease:
https://www.facebook.com/groups/166788013378414/
(a good place to share pedigrees and info)

Thanks for all the messages

. Oran is doing fine and managed his stint in the kennels fine. For a fussy dog, he thankfully has no problem taking his daily tablets.

Juice - I hope Lexi is doing a bit better now?

Sky - my, Obi is so like Oran! It is so very sad. It's especially tragic since, once diagnosed, Addisons is relatively easy to treat.

Sylvaen - Aye, I was directed to that Facbook Group before my hols and joined it. But I could see no way to post on the page, apart from replying to other people's posts.
I contacted what looked like the main user but never got a reply...so maybe other people will have more luck.
Top

lexi is still being a pain. she has lost 2kilo in 3 months we are back at the vet this week and i think he may take some blood for tests. i have looked at addisons on the net but she doesn't have any more symptoms now other than not wanting to eat, she had a course of antibiotics and that sorted out the blood in her stools. i think she is just attention seeking or just being naughty

. glad to hear yours is doing ok and still taking the pills i hope this carries on and he has a long happy life.
www.starlight-tamaskan.co.uk
Top

My friends golden retriever x lab has what they now suspect is addisons disease, should find out hopefully tomorrow when I see him, what the test results say.

He's only 4 and they believe its a chronic type, he might have had from puppyhood. Would explain the random inexppicable bouts of vomiting he occasionally had.
"Don't underestimate me.
I know more than I say.
Think more than I speak.
And notice more than you realize".
"you are free to choose
But you are not free
From the consequence of
Your choice "
Top

fingers crossed it's not. hope he is ok though
www.starlight-tamaskan.co.uk
Top

It says on the tamaskan-dog.com health database that 2 registered Tamaskan (from the same litter) have been diagnosed with Addison's. Does anyone know which litter it is?
Top

Our health database lists Tundra (J&J Moonstruck Tundra) as having a sibling with Addison's. Though when I click on the Sibling button, there are no known sibs. Anyone know who the affected sibling is? Thank you.

[Add:] Does Addison's show up by a certain age?
[Add:] Oh boy, diagnosis exist between 1 year and 12 years of age


Would these two dogs be littermates out of Blustag River Rising and Blustag Menominee Owl?
Cher Mundy
ShadowGate Tamaskan
Top

Would these two dogs be littermates out of Blustag River Rising and Blustag Menominee Owl?

Yes they are littermates. I think I remember there was also a dog from that litter with eye problems and then several with bad hips..

The combination has been repeated two times, not sure if we know anything about the other 2 litters concerning health??
Top
Post Reply
18 posts • Page 1 of 1