How similar in personality to a golden retriever?

All topics pertaining to the temperament / character of the Tamaskan Dog.
Post Reply
3 posts • Page 1 of 1

How similar in personality to a golden retriever?

Hello! I am new to this forum and have some questions regarding the personality of a tamaskan. I am 19 and am going to be a sophomore in college next year now that I am out of the dorms. I have always planned to buy a dog in college and am considering a few breeds at the moment (golden retriever, GSD, and tamaskan) and would like some intel on the tamaskan. I am going to be living in an apartment next year with a park nearby that I could take my dog to a few times a day. The dog would also get at least one long walk a day, and I would be gone 3-4 hours at classes Monday-Friday. I would get the puppy in the early summer so I could socialize them and pottytrain them, etc. I grew up with golden retrievers and they were extremely easy to take care of. They would sleep most of the day and were not high energy. I can easily see myself having another golden that could live happily in an apartment. My only concerns are the health problems in the breed and I want a dog that forms a stronger bond with their owner (more loyal/follows you around). I lost all of mine to hemangiosarcoma and do not want to deal with that pain again. Also, as a young woman in college, it would be nice to have a slightly more intimating/protective dog at my side. I have considered German shepherds, but have had bad experiences with aggression in the breed (my friends GSD killed their other dog and had to be put down despite being well socialized and trained). I am looking into white German shepherds, which are supposedly friendlier, but cancer is also common in the breed. Then I discovered the tamaskan breed, and I fell in love with their personality and appearance. However, I need to know how they will compare to a golden like I am used to. My golden, Molly, died when I was a senior in high school. She was my best friend and I went through the Canine Good Citizen testing with her and I trained her to be a therapy dog. I want a dog that has the same friendliness as a golden so I can hopefully continue to perform therapy work with them. I am wondering how a tamaskan will compare to a golden in disposition. I know they are prone to separation anxiety, so would they be able to be left home alone for a few hours? (I am planning on crate training) They are known for being friendly, but I don't know if they have the same degree of friendliness as a golden. What would be a tamaskan's energy level compared to a golden retriever? Would I be able to properly care for a tamaskan or should I stick with golden retrievers?
Top

Re: How similar in personality to a golden retriever?

I'm just going to tell you, don't buy a dog when you're in school, it never ends well. Some tams are more trainable than others but mine is definitely not even close to a golden. Think more like a husky or even a GSD. Wylie has his Rally Obedience Novice title but that took almost a year to train for.
Polarose Tamaskan
Polardog Outfitters
Owner of Sierra Kaweah RN RI TDI TRN TTDN CRN-MCL @ Polarose
Top 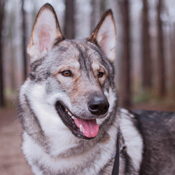 Re: How similar in personality to a golden retriever?

They are not remotely like Goldens :') mine is very friendly and sweet and like my shadow, he follows me around and loves my company, but he's also so smart that he really can have a 'what's in it for me?' sort of attitude and can pick and choose when he wants to do as he's told or just do his own thing. I've had to be very firm and consistent with him. These dogs also can have SA, mine doesn't really suffer from it but he does howl for about 10 minutes when I leave, and he has to be crated just to ensure his and my house's safety (I wouldn't trust him loose at this stage), so crate training needs to be considered, and potential noise complaints. I love my dog, I don't think he's overly difficult, but in comparison to a loyal Golden who thinks the sun shines out of your butt and just wants to do anything to please you, he's not even close.
Top
Post Reply
3 posts • Page 1 of 1